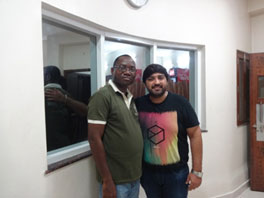 Do you have any health-related issue or any question regarding a disease? India laparoscopy Surgery Site has efficaciously brought out an answer to every sort of query associated with your health. Mr. Sonny Deji Maziku has acknowledged this medical tourism company for their optimum aid, a company that is known to relive a healthy life all over again. Mr. Maziku is always grateful to them.

Mr. Sonny Deji Maziku, who is a resident of Tanzania, had once detected a problem concerning a stern pain in the right upper portion of his abdomen. Besides this pain, he perceived some more signs like fever, jaundice and the pain shifting to the back and right shoulder. He could not comprehend what was happening to him. He took his problem to a nearby doctor who spotted the issue in hisGall bladder Surgery which had become a little serious and called for surgery.

How were they referred to India laparoscopy Surgery Site?

In what manner India laparoscopy Surgery Site helped Mr. Sonny for his treatment?

What steps were taken before calling for a surgery?

After they reached India, the first thing was to visit the doctor as per their planned appointment. The doctor went through their previous documents and listened to Mr. Sonny about his problem. Then, he asked some physical examination that was mandatory to be done before the surgery. The tests contained Blood tests (CBC), Abdominal Ultrasound, Radionuclide Scan, and Abdominal CT Scan.After the inspection of the reports and discussion with the team, he gave a date for the surgery. Before that, he changed prescriptions that were to be followed by Mr. Sonny.At the beginning before the surgery, Mr. Sonny and his brother were worried. The days before the surgery were hard to pass. The hospitality of the staff in the hospital was really up to the mark. They were caring towards their patients and consoled them with good hope.

What post-operative institutive actions were taken?

The day scheduled for the surgical procedures had arrived. With the great courage, they faced the problem. Mr. Sonny’s brother recited prayers for his brother’s good health and soon got the news of the effective surgery.The doctor kept Mr. Sonny at the hospital for three more days with the first two days, the medicine was given through drip and urine pipe was attached to him. On the third day, they started with the oral medicines and the staff member helped him to go to the washroom by himself. Further, they guided him with the precautionary measures to be taken afterward.Mr. Sonny was eminently impressed with the services he had been provided with.

SEND YOUR REPORTS ON EMAIL -
info@indialaparoscopysurgerysite.com


Listen to the Voices of Our Happy Patients

See All Our Patients Videos