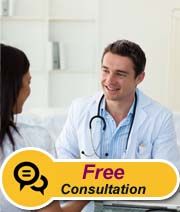 Ovarian cysts affect women of all ages. They occur most often, however, during a woman's childbearing years.

Some ovarian cysts cause problems, such as bleeding and pain. Surgery may be required to remove cysts larger than 5 centimeters in diameter (about the size of a tennis ball).

Some, called functional cysts, or simple cysts, are part of the normal process of menstruation. They have nothing to do with disease, and can be treated. There are 3 types, Graafian, Luteal, and Hemorrhagic. Book your appointment with the ovarian cyst specialist in India to get treatment for Ovarian Cysts in India.

One type of simple cyst, which is the most common type of ovarian cyst, is the graafian follicle cyst, follicular cyst, or dentigerous cyst. This type can form when ovulation doesn't occur, and a follicle doesn't rupture or release its egg but instead grows until it becomes a cyst, or when a mature follicle involutes (collapses on itself). It usually forms during ovulation, and can grow to about 2.3 inches in diameter. It is thin-walled, lined by one or more layers of granulosa cell, and filled with clear fluid. Its rupture can create sharp, severe pain on the side of the ovary on which the cyst appears. This sharp pain (sometimes called mittelschmerz) occurs in the middle of the menstrual cycle, during ovulation. About a fourth of women with this type of cyst experience pain. Usually, these cysts produce no symptoms and disappear by themselves within a few months. Ultrasound is the primary tool used to document the follicular cyst. A pelvic exam will also aid in the diagnosis if the cyst is large enough to be seen. A doctor monitors these to make sure they disappear, and looks at treatment options if they do not.

Another is a corpus luteum cyst (which may rupture about the time of menstruation, and take up to three months to disappear entirely). This type of functional cyst occurs after an egg has been released from a follicle. The follicle then becomes a secretory gland that is known as the corpus luteum. The ruptured follicle begins producing large quantities of estrogen and progesterone in preparation for conception. If a pregnancy doesn't occur, the corpus luteum usually breaks down and disappears. It may, however, fill with fluid or blood, causing the corpus luteum to expand into a cyst, and stay on the ovary. Usually, this cyst is on only one side, and does not produce any symptoms.

It can however grow to almost 4 inches in diameter and has the potential to bleed into itself or twist the ovary, causing pelvic or abdominal pain. If it fills with blood, the cyst may rupture, causing internal bleeding and sudden, sharp pain. The fertility drug clomiphene citrate (Clomid, Serophene), used to induce ovulation, increases the risk of a corpus luteum cyst developing after ovulation. These cysts don't prevent or threaten a resulting pregnancy. Women on birth control pills usually do not form these cysts; in fact, preventing these cysts is one way the combined pill works. In contrast, the progesterone-only pill can cause increased frequency of these cysts.

A third type of functional cyst, which is common, is a Hemorrhagic cyst, which is also called a blood cyst, hematocele, and hematocyst. It occurs when a very small blood vessel in the wall of the cyst breaks, and the blood enters the cyst. Abdominal pain on one side of the body, often the right side, may be present. The bleeding may occur quickly, and rapidly stretch the covering of the ovary, causing pain. As the blood collects within the ovary, clots form which can be seen on a sonogram. Occasionally hemorrhagic cysts can rupture, with blood entering the abdominal cavity. No blood is seen out of the vagina. If a cyst ruptures, it is usually very painful. Hemorrhagic cysts that rupture are less common. Most hemorrhagic cysts are self-limiting; some need surgical intervention. Even if a hemorrhagic cyst ruptures, in many cases it resolves without surgery. Patients who don't require surgery will experience pain for 4 - 10 days after, and may require several days rest. Studies have found that women on tetracycline antibiotics recover 25% earlier than the majority of patients, a surprising correlation found in 2004. Sometimes surgery is necessary, such as a laparoscopy ("belly-button surgery" that uses small tools inserted through one or more tiny slits in the abdomen).

An endometrioma, endometrioid cyst, endometrial cyst, or chocolate cyst is caused by endometriosis, and formed when a tiny patch of endometrial tissue (the mucous membrane that makes up the inner layer of the uterine wall) bleeds, sloughs off, becomes transplanted, and grows and enlarges inside the ovaries. As the blood builds up over months and years, it turns brown. When it ruptures, the material spills over into the pelvis and onto the surface of the uterus, bladder, bowel, and the corresponding spaces between. Treatment for endometriosis can be medical or surgical. Nonsteroidal anti-inflammatory drugs (NSAIDs) are frequently used first in patients with pelvic pain, particularly if the diagnosis of endometriosis has not been definitively established. The goal of directed medical treatment is to achieve an anovulatory state. Typically, this is achieved initially using hormonal contraception. This can also be accomplished with progestational agents (i.e., medroxyprogesterone), danazol, gestrinone, or gonadotropin-releasing hormone agonists (GnRH), as well as other less well-known agents. These agents are generally used if oral contraceptives and NSAIDs are ineffective. GnRH can be combined with estrogen and progestogen (add-back therapy) without loss of efficacy but with fewer hypoestrogenic symptoms. Laparoscopic surgical approaches include ablation of implants, lysis of adhesions, removal of endometriomas, uterosacral nerve ablation, and presacral neurectomy. They frequently require surgical removal. Conservative surgery can be performed to preserve fertility in young patients. Laparoscopic surgery provides pain relief and improved fertility over diagnostic laparoscopy without surgery. Definitive surgery is a hysterectomy and bilateral oophorectomy.

Other cysts are pathological, such as those found in polycystic ovary syndrome, or those associated with tumors.

A polycystic-appearing ovary is diagnosed based on its enlarged size — usually twice normal —with small cysts present around the outside of the ovary. It can be found in "normal" women, and in women with endocrine disorders. An ultrasound is used to view the ovary in diagnosing the condition. Polycystic-appearing ovary is different from the polycystic ovarian syndrome, which includes other symptoms in addition to the presence of ovarian cysts, and involves metabolic and cardiovascular risks linked to insulin resistance. These risks include increased glucose tolerance, type 2 diabetes, and high blood pressure. Polycystic ovarian syndrome is associated with infertility, abnormal bleeding, increased incidences of pregnancy loss, and pregnancy-related complications. Polycystic ovarian syndrome is extremely common, is thought to occur in 4-7% of women of reproductive age, and is associated with an increased risk for endometrial cancer. More tests than an ultrasound alone are required to diagnose polycystic ovarian syndrome.

Some or all of the following symptoms may be present, though it is possible not to experience any symptoms:

Send us your query regarding ovarian cyst surgery and treatment in India.

About 95% of ovarian cysts are benign, meaning they are not cancerous.

Also, limiting strenuous activity may reduce the risk of cyst rupture or torsion.

Cysts that persist beyond two or three menstrual cycles, or occur in post-menopausal women, may indicate more serious disease and should be investigated through ultrasonography and laparoscopy, especially in cases where family members have had ovarian cancer. Such cysts may require surgical biopsy. Additionally, a blood test may be taken before surgery to check for elevated CA-125, a tumor marker, which is often found in increased levels in ovarian cancer, although it can also be elevated by other conditions resulting in a large number of false positives.

For more serious cases where cysts are large and persisting, doctors may suggest surgery. Some surgeries can be performed to successfully remove the cyst(s) without hurting the ovaries, while others may require removal of one or both ovaries. Get in touch with us to know the laparoscopic surgery ovarian cyst cost in India and the average cost of an ovarian cyst surgery.