Appendicitis (or epityphlitis) is a condition characterized by inflammation of the appendix. All cases require removal of the inflamed appendix, either by laparotomy or laparoscopy. Untreated, mortality is high, mainly because of peritonitis and shock. Reginald Fitz first described acute appendicitis in 1886, and it has been recognized as one of the most common causes of acute abdomen pain worldwide 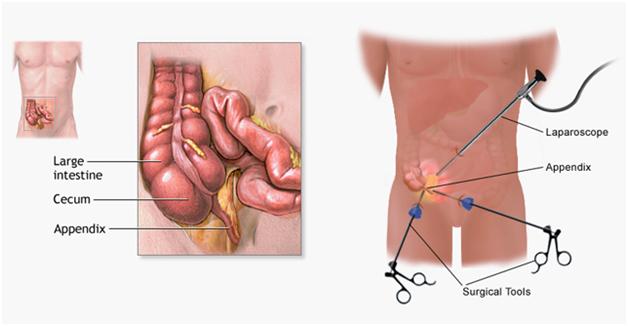 On the basis of experimental evidence, acute appendicitis seems to be the end result of a primary obstruction of the appendix lumen. Once this obstruction occurs the appendix subsequently becomes filled with mucus and swells, increasing pressures within the lumen and the walls of the appendix, resulting in thrombosis and occlusion of the small vessels, and stasis of lymphatic flow. Rarely, spontaneous recovery can occur at this point. As the former progresses, the appendix becomes ischemic and then necrotic. As bacteria begin to leak out through the dying walls, pus forms within and around the appendix (suppuration). The end result of this cascade is appendiceal rupture causing peritonitis, which may lead to septicemia and eventually death. Among the causative agents, such as foreign bodies, trauma, intestinal worms, and lymphadenitis, the occurrence of an obstructing fecalith has attracted attention. The prevalence of fecaliths in patients with appendicitis is significantly higher in developed than in developing countries, and an appendiceal fecalith is commonly associated with complicated appendicitis. Also, fecal stasis and arrest may play a role, as demonstrated by a significantly lower number of bowel movements per week in patients with acute appendicitis compared with healthy controls. The occurrence of a fecalith in the appendix seems to be attributed to a right sided fecal retention reservoir in the colon and a prolonged transit time. From epidemiological data it has been stated that diverticular disease and adenomatous polyps were unknown and colon cancer exceedingly rare in communities exempt for appendicitis. Also, acute appendicitis has been shown to occur antecedent to cancer in the colon and rectum. Several studies offer evidence that a low fiber intake is involved in the pathogenesis of appendicitis. This is in accordance with the occurrence of a right sided fecal reservoir and that dietary fiber reduces transit time.

Symptoms of acute appendicitis can be classified into two types, typical and atypical. The typical history includes pain starting centrally (periumbilical) before localizing to the right iliac fossa (the lower right side of the abdomen); this is due to the poor localizing (spatial) property of visceral nerves from the mid-gut, followed by the involvement of somatic nerves (parietal peritoneum) as the inflammation progresses. The pain is usually associated with loss of appetite and fever, although the latter isn't a necessary symptom. Nausea or vomiting may occur, and also the feeling of drowsiness and the feeling of general bad health. With the typical type, diagnosis is easier to make, surgery occurs earlier and findings are often less severe.

Atypical symptoms may include pain beginning and staying in the right iliac fossa, diarrhea and a more prolonged, smoldering course. If an inflamed appendix lies in contact with the bladder, there is frequency of micturition. With post-ileal appendix, marked retching may occur. Tenesmus or "downward urge" (the feeling that a bowel movement will relieve discomfort) is also experienced in some cases.

These include localized findings in the right iliac fossa. The abdominal wall becomes very sensitive to gentle pressure (palpation). Also, there is rebound tenderness. In case of a retrocecal appendix, however, even deep pressure in the right lower quadrant may fail to elicit tenderness (silent appendix), the reason being that the cecum, distended with gas, prevents the pressure exerted by the palpating hand from reaching the inflamed appendix. Similarly, if the appendix lies entirely within the pelvis, there is usually complete absence of the abdominal rigidity. In such cases, a digital rectal examination elicits tenderness in the rectovesical pouch. Coughing causes point tenderness in this area (McBurney's point) and this is the least painful way to localize the inflamed appendix. If the abdomen on palpation is also involuntarily guarded (rigid), there should be a strong suspicion of peritonitis requiring urgent surgical intervention.

Psoas sign Occasionally, an inflamed appendix lies on the psoas muscle and the patient will lie with the right hip flexed for pain relief.

Obturator sign If an inflamed appendix is in contact with the obturator internus, spasm of the muscle can be demonstrated by flexing and internally rotating the hip. This Maneuver will cause pain in the hypogastrium.

Diagnosis is based on patient history (symptoms) and physical examination backed by an elevation of neutrophilic white blood cells. Atypical histories often require imaging with ultrasound and/or CT scanning. A pregnancy test is vital in all women of child bearing age, as ectopic pregnancies and appendicitis present with similar symptoms. The consequences of missing an ecoptic pregnancy are serious, and potentially life threatening. Furthermore the general principles of approaching abdominal pain in women (in so much that it is different from the approach in men) should be appreciated.

Ultrasonography and Doppler sonography provide useful means to detect appendicitis, especially in children. In some cases (15% approximately), however, ultrasonography of the iliac fossa does not reveal any abnormalities despite the presence of appendicitis. This is especially true of early appendicitis before the appendix has become significantly distended and in adults where larger amounts of fat and bowel gas make actually seeing the appendix technically difficult. Despite these limitations, in experienced hands sonographic imaging can often distinguish between appendicitis and other diseases with very similar symptoms such as inflammation of lymph nodes near the appendix or pain originating from other pelvic organs such as the ovaries or fallopian tubes.

In places where it is readily available, CT scan has become the diagnostic test of choice, especially in adults whose diagnosis is not obvious on history and physical. (The use of CT in pregnant women and children is significantly limited, however, by concerns regarding radiation exposure.) A properly performed CT scan with modern equipment has a detection rate (sensitivity) of over 95% and a similar specificity. Signs of appendicitis on CT scan include lack of oral contrast (oral dye) in the appendix, direct visualization of appendiceal enlargement (greater than 6 mm in diameter on cross section), and appendiceal wall enhancement (IV dye). The inflammation caused by appendicitis in the surrounding peritoneal fat (so called "fat stranding") can also be observed on CT, providing a mechanism to detect early appendicitis and a clue that appendicitis may be present even when the appendix is not well seen. Thus, diagnosis of appendicitis by CT is made more difficult in very thin patients and in children, both of whom tend to lack significant fat within the abdomen. The utility of CT scanning is made clear, however, by the impact it has had on negative appendectomy rates. For example, use of CT for diagnosis of appendicitis in Boston, MA has decreased the chance of finding a normal appendix at surgery from 20% in the pre-CT era to only 3% according to data from the Massachusetts General Hospital.

The treatment begins by keeping the patient from eating or drinking anything, even water, in preparation for surgery. An intravenous drip is used to hydrate the patient. Antibiotics given intravenously such as cefuroxime and metronidazole may be administered early to help kill bacteria and thus reduce the spread of infection in the abdomen and postoperative complications in the abdomen or wound. Equivocal cases may become more difficult to assess with antibiotic treatment and benefit from serial examinations. If the stomach is empty (no food in the past six hours) general anaesthesia is usually used. Otherwise, spinal anaesthesia may be used.

The surgical procedure for the removal of the appendix is called an appendicectomy (also known as an appendectomy). Often now the operation can be performed via a laparoscopic approach or via three small incisions with a camera to visualize the area of interest in the abdomen. If the findings reveal suppurative appendicitis with complications such as rupture, abscess, adhesions, etc., conversion to open laparotomy may be necessary. An open laparotomy incision if required most often centers on the area of maximum tenderness, McBurney's point, in the right lower quadrant. A transverse or a gridiron diagonal incision is used most commonly.

In March 2008, an American woman had her appendix removed via her vagina, in a medical first.

There is debate whether Emergent Appendicectomy (within 6 hours of admission) reduces the risk of perforation or complication versus Urgent Appendicectomy (greater than 6 hours after admission). According to a retrospective case review study  no significant differences in perforation rate among the two groups were noted (P=.397). Various complications (abscess formation, re-admission) showed no significant differences (P=0.667, 0.999). According to this study, beginning antibiotic therapy and delaying appendicectomy from the middle of the night to the next day does not significantly increase the risk of perforation or other complications. These findings may fit a theory that acute (typical) appendicitis and suppurative (atypical) appendicitis are two distinct disease processes. Findings at the time of surgery suggest that perforation occurs at the onset of symptoms in atypical cases.

Surgery may last from 15 minutes in typical appendicitis in thin patients to several hours in complicated cases. Hospital lengths of stay usually range from overnight to a matter of days (rarely weeks in complicated cases.) The pain is not always constant; in some cases it can stop for a day and then come back.