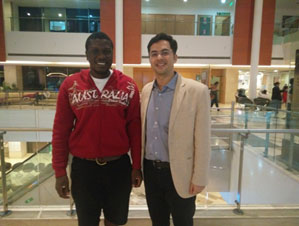 Excruciating diseases make one’s life full of troubles. It never leaves you happy in any way. But a right treatment and strong determination can turn the things around.

Mr. Philip Mahindi, a resident of Tanzania was in deep discomfort due to the shifting pain in his lower abdomen with the urgent need to urinate frequently. He had stones in his kidney and got to know when he perceived few signs like discolored urine, Nausea & vomiting, foul odor in his urine and sometimes fever too.

According to the doctors in Tanzania, the surgery was needed for such complexity in his kidneys. With the knowledge of too many side effects, he wanted the expertise doctor for his treatment. The medical facilities in Tanzania were not high tech. And for special cases, you need innovative technical equipment.

He couldn’t get the desired treatment in Tanzania. After a lot of research, he got information about India Laparoscopy Surgery Site. Ltd., and straightaway decided to contact them for his problem. As his problem was complex, it needed special treatment.

Recurrent or complex kidney stones are basically agonizing. It hinges on the size and location of the stones to be removed. It needs lithotripsy (SWL), ureteroscopy or percutaneous surgery.

One of the executives of India Laparoscopy Surgery Site who had been assigned for Mr. Philip’s case collected all the information, then arranged, and consulted the best doctor in India who had great experience in dealing with such health issues. Also, he organized a reasonable trip for him with transportation from the airport to the hotel and hospital.

With reference to the reports of these tests, the doctor was supposed to give a date for the surgery. In between, the doctor changed the medications that were to be followed by Mr. Philip before the doctors do the operations.

The pre-operative treatment carried on for a week. Mr. Philip was tensed and felt hard to pass the time. The anxiety did not decrease till the date of the surgery. And the day finally arrived.

He prayed to God continuously and went for the surgery. The surgery took around three hours that were a bit long. With a big smile on the face, the doctor announced the good news of fruitful surgery.

It is mandatory to take safety measures right after the surgery till the time doctor suggests as per the type of your surgery. With noble care, the nurses there served Mr. Philip and guided him about the precautions and the new diet he had to follow.