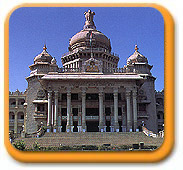 Bangalore, a city of adventure and a fast growing metropolis, this 'garden city' is the capital of the southern Indian state of Karnataka. Situated about 1000 m above sea level, it is known for its wonderful climate where temperatures remain moderate through out the year. It is connected by air, rail and road to all major cities of the country and has direct international connections to many cities worldwide.

Banglore also known as SILICON VALLEY is the political hub of the region mainly due to its economic importance .It is Karnataka's capital and is one of the fastest growing cities in Asia. The population is around

8 million. Now a day the main attraction of Bangalore is M G Road area, where fast food joints, yuppie theme bars and glizzy malls are all the rage. Bangalore's gentle climate, broad streets and green public parks made it the GARDEN CITY in 1800's. But after Indian independence the situation became almost adverse because maximum of the persons who were of good recognition like film stars and V I Pspreferred their establishments here. During the last decade Bangalore has undergone a massive transformation. The wide avenues, now dominated by tower blocks, heavy traffic and water and electric shortages have become the part of the city. Even the climate has been affected and pollution problem has become the major problem here.
Currently more than 700 IT-companies are going about their business there. Among them are almost all the global giants of the e-business-sector which run both wholly-owned or partially-owned subsidiaries and joint ventures with domestic partners. In the meantime some prominent domestic software firms have also been established. The city?s software industry is highly export-oriented and handles a spectrum of services that ranges from fairly low-tech, labour intensive activities like data entry and transcribing work to much higher value-added activities like developing end-user applications and software packages or services.

Location
Bangalore is in Karnataka State and it is bounded in east by Andhra Pradesh ,west by Goa and the Arabian Sea; south by Kerala and Karnataka and north by Maharashtra . 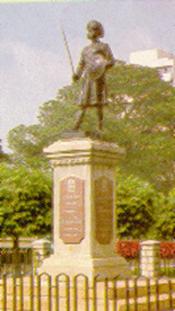 Bangalore airport is 13 Km north of the city centre ,serves cities throughout south India and beyond .

All national highways throughout the country are well connected with Bangalore .All types of tourist buses are easily available here on hire . Near the city tran station the central bus stand is located .Within the state bus services are available from K S R T C .Interstate buses are operated by K S R T C and A P S R T C .Private bus services are also available from Bangalore to the major part of the country but they are more expensive .Private buses leave from the street facing the central bus stand .

Access by Rail:
Regular train services connect Bangalore to all the major cities in India such as to Mumbai in Western India, New Delhi in North India, Cochin in South India, Kolkatta in East India etc.

Lal Bagh Gardens
Lal Bagh is a must see while visiting Bangalore. The name Lal Bagh has been given to it for the wonderfully bloomed red roses that remain blooming all through the year in this garden. The garden has also a collection of famous Botanical species. Though the flow of visitors to the park is a regular affair, the garden gets a festive look during the Republic Day and on the days of flower shows that are held here.

Vidhan Soudha, built in the year 1954 is one of the major centres of attraction in Bangalore. The architecture of the building is based on the neo Dravidian style and it presently houses the Legislative Assembly of the state of Karnataka. The building also houses a part of the Karnataka secretariat.

Situated in the heart of the Bangalore city, the Cubbon Park is an interesting tourist spot which one should not miss out. The park was laid by Lord Cubbon in the year 1864. It is spread over an area of about 300 acres and the layout is absolutely exquisite.

Built in the year 1887, Bangalore palace is a must see tourist spot in the garden city. The architecture of the palace is based on the Tudor style. The palace is situated in the middle of the Bangalore city making it easily accessible for the tourists. Covering an area of about 800 acres, the palace gives a look of the Windsor Palace of England.

Venkatappa art gallery is a pleasant treat for the art lovers. It has about 600 paintings on display that you can see all through the year. The art gallery also has some of the exclusive collections of scenic displays.

The palace and the fort of Tipu Sultan are the must see spot in Bangalore. The architecture, the layout and the overall look of the palace gives you the idea of the ethnic Mughal lifestyle. The fort and its remains present the history of the era in which it was built. The construction of the Tipu palace was started by Haider Ali and completed by Tipu Sultan himself.

The International Society for Krishna Consciousness or ISKCON Temple Complex of Bangalore is a marvellous building structure that has blended the Dravidian and modern architecture in its construction. The building has some of the modern facilities like the multi-vision cinema theatre, computer aided presentation theatres along with vedic library and a preaching library. The temple also has good accommodation facility for its members and non-members.

The statue is a 65 feet high depiction of Lord Shiva in a position of Padmashan or Lotus position. The statue is complete with Mount Kailash, the Lord's heavenly abode and the river Ganga flowing from his matted locks in the background. The entire area gives you a clear picture of the mythological legend related to it.

The Bull Temple is dedicated to Lord Shiva's Vahana (vehicle), Nandi the bull. Here you can find a huge monolithic statue of the sitting bull that draws a large number of people to this place every day. The statue is 4.5 meters tall and 6 meters long and has been at this place long before the present temple was built.

The sight of the Aquarium, which is the second largest in the country, is quite fascinating. Built in a well-planned manner, the Aquarium has a good collection of a variety of aquatic life. The Aquarium remains closed on Mondays.

Among the other places to visit, the Jawaharlal Nehru Planetarium is a must see. Visiting any of the shows here gives you a good view as well as factual knowledge on astronomy. Easily accessible from any corner of the city, the planetarium hosts daily shows of astronomy. It is a fascinating experience for the children.